One of the elements that is often missing from the more theoretical Open Badges literature is that of the user’s motivation and willingness to learn. It’s easy to assume Badges will gamify people or make material the pathways of learning that the user never visualised before, without the learner having to lift a finger.

To some learners, the first reaction to Open Badges is the B word. It’s a Badge for god’s sake. I have one on my lapel- it’s an old Anglia TV badge I wear for ironic purposes. Like most people my age my reference to Badge is of the “I like Ike” kind- tin and pin- rather than the Anglo-Latin bagia or “emblem”. Badges, unlike Degrees, are meant to be shown, and their transparency is a vital component of what they are about.

From its early stirrings in informal education badges are a kind of chimera because they are flexible and multiplex. Yes, you can award someone a badge for having a nice smile, or for successfully managing a multi-million dollar project, and this is why those who have grown up inured in HE processes see it as hard to grasp.

My own feeling is that badges could be complementary to Higher Education degrees rather than disruptive, and that as a visible insignia could in fact do much to encourage a learning society.

As such I am going to explore how Badges might work in HE by issuing a badge according to the Open Badge standard, and observe and note the dynamics of throwing a small digital pebble into the millpond of HE does. But first a recap on how I got here.

If you type in Open Badges 101 to Google you get almost 1.4 million hits, so you get an idea of interest. Sure it’s not at the pitch of MOOCs (4.3 million), but mainstream media is yet to pounce on this concept probably because it is so nebulous. Expect stories of the end of the University, or the extinction of Degrees soon though.

So let’s start with a definition.

“A digital badge is a representation of an accomplishment, interest or affiliation that is visual, available online, and contains metadata including links that help explain the context, meaning, process and result of an activity” (Gibson, Ostashweski, Flintoff, Grant, & Knight, 2013, p. 1). I think the word activity betrays its informal roots here, and endeavour might be more inclusive than ‘activity’ to cover cerebral or intellectual pursuits too.

The MacArthur Foundation, a keen supporter and funder of Open Badges has a pithy definition: “a validated indicator of accomplishment, skill, quality or interest” Dan Hickey states it is “An artefact that contains specific claims about learning and evidence of learning”

If badges are an online graphic insignia, then they have an essential soul- that can contain the evidence and criteria by which they are earnt. In fact there is a rather Cartesian graphic that gets shown time and time again on Slideshare, which I reproduce here. In short, you shouldn’t be fooled by a badge, unlike a degree certificate. 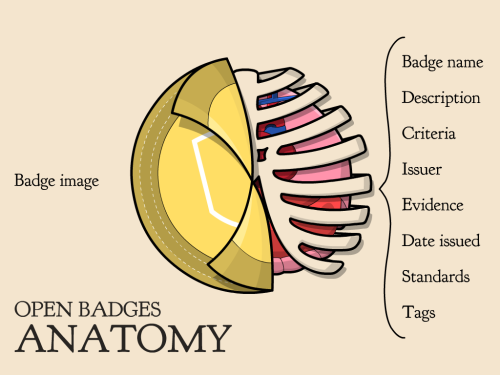 The Iconography of Badges

So now we get to the nub. Badges always look childish and well, badge-like because they are designed as lightweight graphics that can be stuck up on any social media, like a thumbnail, because unlike a gold leaf embossed parchment degree certificate with its signature and references to hundreds of years of tradition, they are merely signposts to hang your metadata onto. I’ve always thought it would be great to challenge these certificates with a glorious 4k resolution pixel high dynamic range image for those of us working in visual effects and computer generated imagery-  a hi-res calling card of exquisite beauty- imagine your own bayeaux tapestry length selfie telling the story of your achievements, but that’s confusing the object with the achievement. However at a symbolic level I think the iconography of badges does send out messages to the wax seal and parchment brigade that badges are trivial. We nobs need to remember the map is not the territory! 256 colour vector graphics may remind us of camping awards but we need to think of them as digital heraldry, sigils and guilds, and yes even exclusivity, in the same way communities of practice can be exclusive once you’ve joined.

At the heart of it I’m interested in Badges as a tool to foster a learning society by making achievement visible and a source of pride and identity.

For the user each badge can be a step forwards or sideways, highlighting a myriad possible paths. Hopping from one lily pad to another is probably a better metaphor than the lights on a runway. Mixes of formal and informal education and granular and macro achievements are more disruptive than the linear certification that HE defends- A levels, diplomas, degrees, postgrad, PhD used to make sense when there was a destination to be had. Interests were something you highlighted on CVs and at job interviews to claim you were a rounded individual. There is a danger a constellation or ragbag of badges fragments and atomises us, but that’s where we need designers with foresight to plan the starfield, and that’s not coming from HE at the moment. Their big idea seems to be the stakhanovite two year degree, or the integrated masters. More monolithic work in less time to save cash.

In my old job the government insisted employers were consulted about what they wanted in terms of skills programmes, but often the response from them was “I’ll know when I see it”. This is the tragedy of treating a lot of the creative industries like they are British Aerospace. Standardised paths of progression lead to stable flows of talent to enable planning for the aircraft orders of tomorrow, but webs of skills in a “just in time for tomorrows project” is a more useful methodology for the creative industries, and this was at one time one of the supposed benefits of the modular system in HE. Now though building your employers skills from a choice of rigorous connected badges makes real sense, and that’s exciting. Organisations like Creative Skillset who have the oversight to do the connecting rather than the siloed and isolated employers are key here. Unfortunately it’s costly, and neither government nor employers are attuned to the benefits of this. An affiliation of Universities and Creative Skillset could lead on this. With badges it doesn’t matter if only three people have a particular badge choice whereas that’s a big problem if only 3 people take a degree. It’s a bit like mutation in DNA- sometimes that can throw up a sheep with two heads, but every so often a Neanderthal gets a larger frontal cortex and starts smelting iron ore and making semi-conductors.

Yes, a constellation of badges can be wasteful seen through the lens of traditional skills agendas, but so is DNA, and that’s done us OK so far.

In future posts I’ll try to expand on some of these ideas, and focus on what I think are key areas. 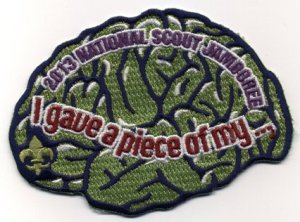