I’ve been researching Open Badges (and other forms of digital credentialing) for a while now, and have been curious why they have not yet found a firm niche within Higher Education.

I’d suggest part of the answer is Universities are generally resistant to the philosophy of Openness that is enshrined within Open Badges. The University business model relies on their Degree processes being closed to the wider world. The fact that anyone can issue badges, and that a badge has no set duration or ‘level’ (you can get a badge for turning up to a junior football match, or a badge for managing a successful EU-wide project team) is a particular problem to HE. On a superficial level badges also look, well, childish and superficial, and therefore ‘mass produced’, which you cant say about a hand-signed, wax seal and crest festooned certificate. I think academics also rightly find it hard to look beyond the associative word Badge, and I have to agree after giving a presentation to staff recently, that you have to spend a while saying how it is not like a ‘badge’. To understand this block, imagine if all University Degrees were called “Parchment With Gothic Writing On It”; you’d probably spend a lot of time persuading people to look beyond the object and understand the inherent value too.

As the core University business is degrees, an additional award system might seem to suggest to some the degree is not fit for purpose. That’s not my point. I think digital badges can amplify the eligibility that a degree bestows on students as I hope to explain.

There also may be another factor at play here – the University’s KPIs are all built around the degree and reputation. There’s no extrinsic reward for prototyping or experimentation with new kinds of awards or credentials. We tell our students to be innovative, entrepreneurial and to ‘fail fast’ but no space is afforded to do this as teachers ourselves in order to improve how our students’ learning can be identified, promoted and celebrated. 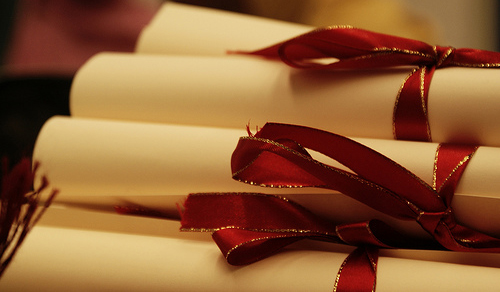 I think there’s a similar wariness to explore other modes of learning in some Universities responses to MOOCs. MOOCs: friend or foe? they seem to be thinking. Rather than celebrate the experiment and display curiosity or even engage critically there’s an inertia, like the bride handed a wedding gift that wasn’t quite right, so out of politeness avoided mentioning it again. MOOCs most likely don’t immediately connect to any KPIs surrounding the degree, the core business. MOOCs aren’t really explored for new pedagogical potential, unless it can be seen to lead to extra student numbers for degree courses.  However, I notice that now MOOCs are starting to get credit bearing this area may turn more heads soon.

Badges: what is HE missing out on?

I believe a good badge system could not only complement, but also strengthen the value of a degree, rather than disrupt it. Although a badge system doesn’t need to be about employability, I’ll use that as the example here.

We know there are more people studying creative media than are needed in the marketplace. Employers find it hard to understand and make a judgement on graduate talent through degrees. Sure, portfolios and showreels are the lingua franca, but they don’t answer all the recruiter’s questions.

Think of this interview scenario: Two film degree candidates with the same grade. They both rock up for interviews with their similar showreels. At this point their university degree got them in the room– there’s an assumption they are worth seeing, that they have a certain standard of skills. But now, who gets the job is down to their showreel and the quality of interaction with the interviewer. All good so far- as we’d imagine. However the interviewer currently finds it hard to divine other skills and aptitudes from the reel- “How do I know they are a team player?” “Do they really have the experience of lighting that they claim?” “What did they really learn on their work placement?” “How much do they know about budgeting?” Interestingly, even if these things were learning outcomes written into the course document, the interviewer won’t be aware, because Learning Outcomes are never mentioned again after the course, nor appear on any certificate (even if they are evident on the reel). The Degree was merely the taxi that drove the candidate to the interview – but its a taxi with darkened windows.

Now, for our beleaguered interviewer  to choose the right candidate from these two graduates who each have a 2:1 and similar reels might be difficult. This difficulty is magnified if there are say, 8 people being interviewed separately- all with the same grade.

So, imagine a second scenario; one of those candidates brings along with her showreel all the main people she’s worked with to vouch for her. They all cram into the interview room. There’s the DIT freelancer who came in to teach her on a student shoot who vouches for her fastidiousness and nerve under pressure. There’s the lecturer who was so positive about her attitude to budgeting. There’s the guy from the lighting company that she did a placement with, and the student union that were impressed with her event organisational skills and even the registrar who called her timekeeping exemplary. All these personal recommendations, these endorsements will give the interviewer a much better picture and greater trust in the candidate they have in front of them.

Now although this may be impressive, our grizzled cynical interviewer remains unsure, despite these personal assurances. Luckily all those people have brought along examples to prove their assertions! Wow. The interviewer chooses this candidate over the others because she is vouched for, and can show all this specific evidence if required, beyond their showreel.

Ladies and Gentlemen, that’s what badges can do. No-one can get all those people to turn up and vouch for them in an interview, but we can create a system of such endorsements. Those people in the room could all be individual badge endorsers, and the baked-in metadata can point to the evidence if needed. In this scenario, the degree is actually amplified by those badges, and I’d suggest the University is enhanced in terms of reputation too.

If the University has no volition to explore digital badges, never mind about Open Badges, appealing to senior staff and decision makers may be the wrong tack. Might it respond to nudges from its key stakeholders instead?

The way to achieve change might be through the student body- the ‘Student Centred’ university would then need to consider the option. (I admit images of Marx’s workers who need to achieve ‘Class Consciousness’ before they can collectivise and overthrow their shackles of oppression springs to mind here!)

If students were introduced to the advantage Open Badges could give them in the competitive jobs marketplace (see how I’ve hopped so elegantly from Marx to Milton Friedman?) then there is permission for change. If, as a student you see that you can give recruiters evidence of your dexterity and expertise in specific areas which are currently hidden like a needle in the haystack of the Degree away from the employer (“You’ve got a degree in Film? Great reel. But, how do I know I can trust you as a DIT assistant?”), – and if as a student there is a mechanism for you to be endorsed by a trusted professional (like that freelancer who came in and taught you about DIT work in your second year?) then you have something that lends considerable weight to your showreel, portfolio or degree.

Now there are huge risks with informing students about the potential of Badges- as they have also invested in the reification and monopoly of the degree. However I think if a clear narrative is presented along the lines of amplifying the importance of the degree and maximising its impact in the jobs market, then it will avoid many of the pitfalls of students seeking out easy badges elsewhere on the open network, or thinking about skills in a fragmentary way.

Hold on a second though- that fragmentation happens already with students seeing modules and individual units as discrete hoops to jump through. As with most things “Badgey”, (like issues of forgery for instance) what we already have is probably more dicey, but it’s not new so we live with it.

What about Employer leverage?

A second way in which Universities may eventually adopt digital badges is through employer pressure and demand. So why haven’t I mentioned this? Because I think Universities are the experts and are more long term in their thinking. Employers would understandably want badges that dealt with short term employment issues, and wouldn’t find it so easy to build constellations, clusters or frameworks collectively. You could end up with competing proprietary badge systems. Students and Universities working together on badges would of course involve employers, but the bird’s eye view of the subject territory belongs to the best universities, and the real kudos will be with the early adopters in Higher Education.