It doesn’t rain all the time in Manchester. In fact, the Immersive Arts Lab 7 “Virtual Reality Story Telling in Real Physical Space for Multiple Audiences” workshop I attended at the University of Salford coincided with the much-vaunted February storm Ciara, (arguably also a virtual reality in a real physical space for multiple audiences itself). Hurricane Ciara took a couple of hours to decide it had had enough of Salford’s Media City UK, shrugged, and moved off South to where people would probably pay more attention.

In both the barometric and metaphorical calm before the storm, Immersive Labs group convenor and founder  Mark Ashmore stated in his introduction to the workshop that “VR/AR Technologies have now become an accepted reality – but we are still a decade (in my opinion) away from fully understanding this complex digital artform, which at its heart is a spatial creative tool and like a Swiss army blade, has many tool sets attached”

One of the interesting things about any new media (if VR can be called that) is working out how it can be realised and accommodated by interrogating our past technologies to search for precedents and lost moments we can dredge up to guide us.

There seems to be a big drive in the immersive experience economy (especially amongst artists) to build spaces that free us of the captive oppression of headsets. There’s a growing intention to build more communal and possibly collaborative and discursive ‘meatspace’/meetspace physicality through projection mapping, 360 Audio and interactive elements to tell stories to mass audiences in constructed real spaces. The archetypal form of the dome or hemisphere is ideal for wraparound projections. “In the UK we are seeing the re-resurgence of domes being used as immersive story telling spaces – either as inflatable pop ups at festivals and conferences or Planetariums, once used to gaze at space visualisations, are now being taken over by experimental VR Artists” notes Ashmore.

Building Globes and Domes to test out projected environments these days is not easy in our flat screen rectilinear media world. I got interested in attending the workshop as it promised a new way to use VR; as a tool in the process of experimenting and prototyping physical installations and environments before you build your structures, hire your projectors, or arrange your spatial audio system.

We’d all congregated to be shown Arcus Studios still-in-beta software codenamed Festoon that enables easy forms of projecting video and graphics onto a dome within a virtual space in order to prototype possibilities, take risks, develop and calibrate assets to measure without the need to rent or rehearse in a real physical space. It’s a user friendly ‘pre-viz’ tool for creating collective immersive experiences in meatspace.

The MediaCity’s calculated development in Salford is a modern pop-up shop of a media hub compared to London – the origin of my journey- with its centuries of accreted media archaeologies, hidden histories and sense of place that seeps into contemporary life. Reading about the virtual domes I was about to experiment with on the train northwards, I was reminded of an older media dome technology; that of the pre-cinema diorama. Take for example the West End’s Leicester Square, which has long been associated with cinema screens and red carpeted extravaganzas. In a former media era it was the centre of a different kind of public spectacle.

Wyld’s Great Globe in Leicester Square was a diorama set in a sixty feet diameter dome in what was then Leicester Square Gardens. Between 1851 and 1862 it was the Odeon or Cineworld of its day, constructed by former Member of Parliament James Wyld (1812–1887), an entrepreneur and distinguished mapmaker by profession. The dome-bedecked Great Globe was one of the tallest buildings in London’s West End at the time, stuffed with painted murals, plaster of paris mountain ranges and craggy terrain from the world’s continents and islands attached to the inner sphere, making a kind of inverted planet. Like some strange water birth, visitors entered the globe through an opening in the Pacific Ocean.

As many as 3 million people are said to have paid a shilling to visit its 11 year existence, stepping into a dome of wonders. It is not known if the diorama featured magic lantern projections too but certainly the public must have felt they were entering a ‘virtual reality’. Indeed, the internal gantry and the dome above offered a way in which the viewer was given agency to choose how they consumed the images that enveloped them. The estimated 6,000 plaster casts of features must have contributed to an exciting 3D parallax effect making the experience stereoscopic and even more immersive.

Mad Macs: Beyond the Dome

I’d come to Manchester with almost 30 others to take part in a 2-day Immersive workshop to explore how VR might be used to tell new stories, ostensibly by looking back before the birth of cinema itself. Immersive Labs are a group of VR creatives from all creative backgrounds that come together once every 3 months to play, make and create VR in a pop-up lab. We’d all turned up with a rag bag of Unreal and After Effects laden laptops, VR headsets, sound mixers, projectors and 360 cameras, supplemented by University of Salford’s stash of tech and studio space.

What was particularly attractive was the premise of this workshop- to use VR to plan experiences that might be projected on a dome.

The added benefit of this system is the creation of the work remains in a full VR pipeline. VR artists can work in VR Art packages and transfer to Festoon in order to display, edit and recalibrate. You can check out your position and view at any point in your virtual dome, write notations within the space to remind you an image is too bright or the wrong resolution. A particularly useful tool was a mirroring facility that allowed you to ‘grab’ images open in photoshop and place them in 3D dome space, checking curvature and perspective.

Arcus’s Creative Producer Mike Gandham introduced the concept of fulldome (fully immersive domed digital cinema). “Fulldome mixes the immersive potential of VR with the event psychology of cinema or theatre…for me, it opens up the potential for new art forms and collective experiences to be developed. Noted, there is a committed but only relatively small international community working in the medium at present, but similar could be said for cinema when it was taking its’ founding footsteps”. 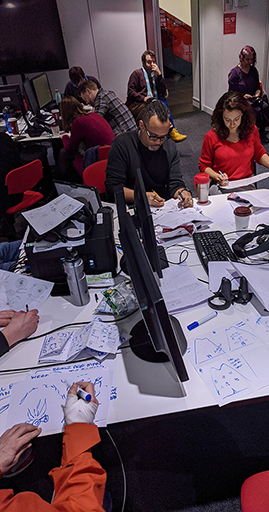 Working in teams with an agile and rapid turnaround series of sprints we developed ideas for our virtual dome. Wyld’s Globe of 1853 had explored the outer expanses of the world’s terrain as exoticism and imperialism were themes of the age. Here in the lab our imposed project brief went back even further; we used the technologies at our disposal to explore what Cave Paintings as an immersive experience might have been, and what a digitally immersive comparison today might be. Today’s cave might be a projection mapped geodesic dome – but without bison and aurochs in our modern landscape what imagery would be used? We settled on the universal and iconic symbol of the stencilled hand– found in caves around Europe and the Americas – blown pigment leaving a ‘digital’ trace that lasted tens of thousands of years. The image is both Digital as in its original meaning and digital in its present.

With over a million Oculus Go on the streets alone and supposedly 171 million people using VR worldwide in 2019 alone,  this is a medium that needs to find new audiences and the hybrid approaches of artist collectives like the Immersive Arts Lab. “It’s clear that the VR-headset market has yet to truly take off, though” says a music ally article in Jan 2020. “Combined, the top five VR headsets sold 913k units in the final quarter of 2019”

Maybe VR will find a niche with artists as a pre-visualisation tool for real physical installations and spectacles that appeal to mass audiences. Maybe we’ll see domes return to Leicester Square as the last cinema is bulldozed to make way for a new communal entertainment format, as yet unseen. 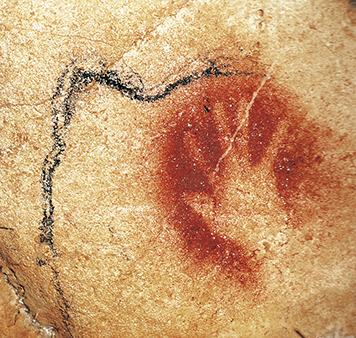