The concept of Clay Shirky’s Cognitive Surplus is a seductive one as expounded in his 2010 book, subtitled Creativity and Generosity in a connected age. Thanks to the networked world of new media we now all have the potential to donate the spare time we usually donate to leisure pursuits or more pointedly, passively consuming ‘old’ broadcast media, towards more active and collective participation in the world.

Shirky cites that modern day library of Alexandria, Wikipedia as an example- over 100 million hours of volunteers free time made it happen. He suggests if Americans used more of the 200 billion hours each year that they devote to the gogglebox to build a better more co-operative world.

Underpinning this is the notion that new media gives us the possibility to be creative producers of one kind or another, and seek out information or knowledge. However, when we look at students’ behaviour, we also find little evidence that this surplus is being used to learn. If anything we see a different form of consumption emerge, where nothing is believed because students have access to so much information, but no cognitive tools to sift, analyse and assess.

In Rethinking University Teaching Diana Laurillard revives and extends Rothkopf’s useful neologism of mathemagenic activities; defined as activities that ‘give birth to learning’. One of the curious trends that came out of my own recent experience teaching and researching is how little of a learning culture has emerged from new technology. Cognitive Surplus hasn’t automatically been converted into anything more useful than FOMO anxiety and new forms of echo chamber. I realise this is the equivalent of the ‘it’s the 21st Century- where’s the jetpack I was promised?’ meme but maybe teachers need to step up to the plate and engage a bit more with designing mathemagenic experiences within our Universities. 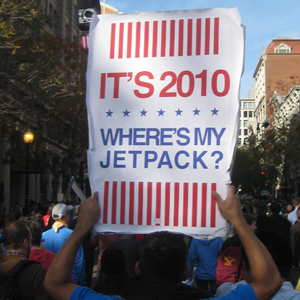 Much of Laurillards work is concerned with just that. She also suggests that “a peculiarity of academic learning is to focus, not on the world itself, but on other’s views of the world”. In other words Universities should enable the students thinking to transcend their own personal experience.

It’s tougher than it sounds, especially as a recent survey I completed of student’s attitudes of their own degree program suggest students only recognise experiential learning as legitimate. They see academic learning as dusty old theory. In talking about their degree the keyword ‘experience’ outnumbered the word ‘study’ almost four times. The employability agenda and anxiety about a career is now so ingrained that students seek out project based learning with a surface approach. “For some students, the focus of a problem-solving exercise is getting the answer out” says Laurillard.

In a rather elegant analogy Laurillard suggests that students need to understand that an academic text is not a clear window onto the world – “a closer analogy would be looking through the wrong end of some grubby binoculars adjusted to someone else’s eyes.”

If the aim of University teaching is to make student learning possible, maybe we need to get better at explaining to students that experience isn’t everything.